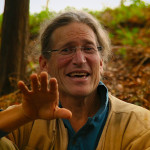 The explosion of doco’s about sustainability in recent year include a fair number that focus on permaculture and I have been interviewed in quite a few. The request to look at Inhabit and give a comment was just part of my “responsibilities” as co-originator of the permaculture concept. In the end I got to view Inhabit with 200 other permaculture activists at the 12 Australasian permaculture convergence in Penguin Tasmania in March 2015. There was a standing ovation after the viewing.

Of course the art and beauty of this film will make it attractive to audiences used to polished media productions, but it is the substance underlying the beauty and passion that attracts me. Of course the film can’t convey enough about the ideas and project presented for me to personally endorse every element as representing the best of permaculture, but I can endorse Inhabit as one of the best permaculture doco’s of the last thirty years.

INHABIT: A Permaculture Perspective was released on Earth Day, 22nd of April 2015 and is now available.

Finding pleasure in the free things in life

Leave more than your footprint