Principle 9: Use Small and Slow Solutions

Michael Green often uses his thumb to catch a long distance lift, and carries everything he needs on his back. Waiting near the freeway entrance, with a request for a lift to a nearby city, has proven to be a better technique than waiting on the freeway with a request to the final destination. His plan was to travel 900km before nightfall, but if he didn’t make it the whole way, he was prepared. 10 hours later a text came through “couldn’t have got here faster if I drove myself!”

Michael wrote this post about his adventures after this photo was taken, sharing stories with ‘Lucky Dave’.

THIS is how all my stories about hitch-hiking begin: I was waiting on the side of the road, near x, when y pulled up. This time, read: Seymour and a mid-sized truck.

The set up is the same, but what happens next is always different.

Dave wore a baseball cap and wrap-around sunnies. “I’m not allowed to give you a lift,” he said as I climbed up. “But stuff it, I’ve lost my job anyway.”

His boss had called him the previous night, asking him to turn in his keys, only to call back an hour later to see if he could do one more shift. He needed the money more than his pride. So there he was, delivering car parts up the Hume Freeway. I accompanied him on his stops at Benalla, Wodonga, Albury and Holbrook.

Dave was from a large town in central Victoria. A week ago, he’d had an altercation with a manager in Melbourne. The guy had wanted to fight. “I don’t fight anymore – did all that when I was younger. If it was a few years ago I would have smashed him,” Dave said. “Yeah, I fought a lot when I was younger.”

He shifted his cap, showing a close-shaved, balding head. Sitting behind the wheel, he had a lanky aspect, with a slight paunch, and it was hard to imagine him as a fighter. We talked about what work he might do instead. “Hospitality. I’ll go into hospitality again,” he said. I couldn’t really imagine that either.

He’d been a glazier, but had three hernias from lifting glass. (“I’m a bit weak through my middle bits.”) He’d been an arborist, but got a rare fungal infection from a eucalypt. (“I’ll always have it – it’s scarred my lungs.”) He’d been a truck driver. Until now.

“Lucky Dave, they call me. I say it’s a good thing I’ve got bad luck, otherwise I’d have none at all.”

It was a nice line – so good, in fact, it seemed incongruous, like his fighting past and his hospitality future. Our conversation was hard won. It wasn’t that Dave didn’t want to talk, I thought. More that he wasn’t used to giving much away. And our lives didn’t overlap in the ways that would make it easy.

So I asked lots of questions and he didn’t ask any. He gave the clipped, limited answers common to many Australian men. I’d leave it rest for a while, not wanting to overreach. Then he’d proffer something: about his busted four-wheel drive, or his father’s dodgy heart, or his wasted mates.

This last one gave me the fear. Dave’s portrait of his town and his social life was dystopian. “Ice is easier to get than marijuana,” he said. “I’ve lost two mates to it.”

He used to smoke it too, every day for a while, along with weed, and then clock onto his job. He told me about friends – a husband and wife with kids – who’d received a large transport accident payout and spent it all on ice. They couldn’t stop. He’d taken a couple of mates into his home, to help them get off it, but had to kick them out again.

“If it wasn’t ice, would it be something else?” I asked.

“Yeah, they’re so used to being high, they can’t handle being sober anymore.”

Now he’d offered a room to another mate, who’d been drinking too much. Dave recognised the signs, because he’d been through it himself. In any case, he was glad of the company – he had a rule not to drink alone anymore. Now when his friend walked through the door each night, he laughed, they could drink together.

All this made me think of an op-ed I’d read a month or so ago, by a journalist and former Liberal Party member, Chris Earl. He was taking aim at economic reforms that lead to fewer regional jobs in agriculture and manufacturing.

“Who would be left to pick up the pieces?” he asked, and decried the situation now: “government at all levels… today prop up country towns” and, further, “country people are increasingly beholden to government for survival”.

Last year, as I hitched through Western Queensland and NSW, I noticed that major towns like Charleville, Cunnamulla and Bourke seemed, above all, like government service centres. I’m in no position to generalise; the causes and effects are complex and solutions hard to imagine. Maybe that’s why smoking ice seems like a good idea.

Earl proposed one answer: “Perhaps the way forward can be found in history – the return of more locally owned co-operatives and enterprises capitalising on local resources and skills, towns taking back responsibility for their future”.

Hours up the freeway, Dave dropped me off. I jumped out of the cab, but he looked on the seat beside him and beckoned me back. Wide-eyed, as if surprised by what he was doing, he passed me a glad-bag. “Go on, take these,” he said with a nod.

I looked down at my hand. They were his driving snacks, I guess: two tubes of instant tomato soup, a muesli bar and a packet of strawberries-and-cream lollies.

Earlier, we had stopped for fuel. I was looking for food in the shop, and turned to see Dave at the counter. He’d raised his sunnies onto the top of his head, and his long, dark eyelashes startled me. His eyes were honey-brown, and he looked much younger, almost unrecognisable from the man in the truck, soon-to-be unemployed, who had described those hopeless scenes. 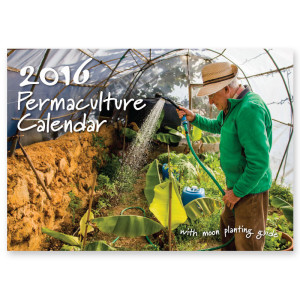 With Michael Green featuring in the month of September. There’s plenty of other intriguing images to illustrate the rest of the design principles, and a rain / temperature chart to help you keep track of local weather patterns. We’ve also now got quarter moon icons for both northern and southern hemispheres.

As previously, the calendar is made from 100% post consumer recycled pulp on certified carbon neutral paper that is manufactured and printed in Australia using 100% renewable energy. And net proceeds are tithed to Permafund, supporting permaculture projects internationally. Check it out.

Our permaculture journey in images