“The bigger they are, the harder they fall.” “Slow and steady wins the race.”

Small and slow systems are easier to maintain than big ones, making better use of local resources and produce more sustainable outcomes.

The snail is both small and slow, it carries its home on its back and can withdraw to defend itself when threatened. The proverb “the bigger they are, the harder they fall” reminds us of the disadvantages of excessive size and growth while “slow and steady wins the race” encourages patience while reflecting on a common truth in nature and society.

Building with what you can get your hands on

Carrie is helping Rebekah build a small kitchen for her campsite on the edge of her parents land. Materials have been collected as they have become available, at little or no cost, and mostly from the property. This wall is being made with a light earth mix of straw soaked in a slip of clay, donkey poo and sand, placed in pallets framed with bush poles. “Every step of building with earth takes me a long time to complete but slowly, something of beauty is emerging.” 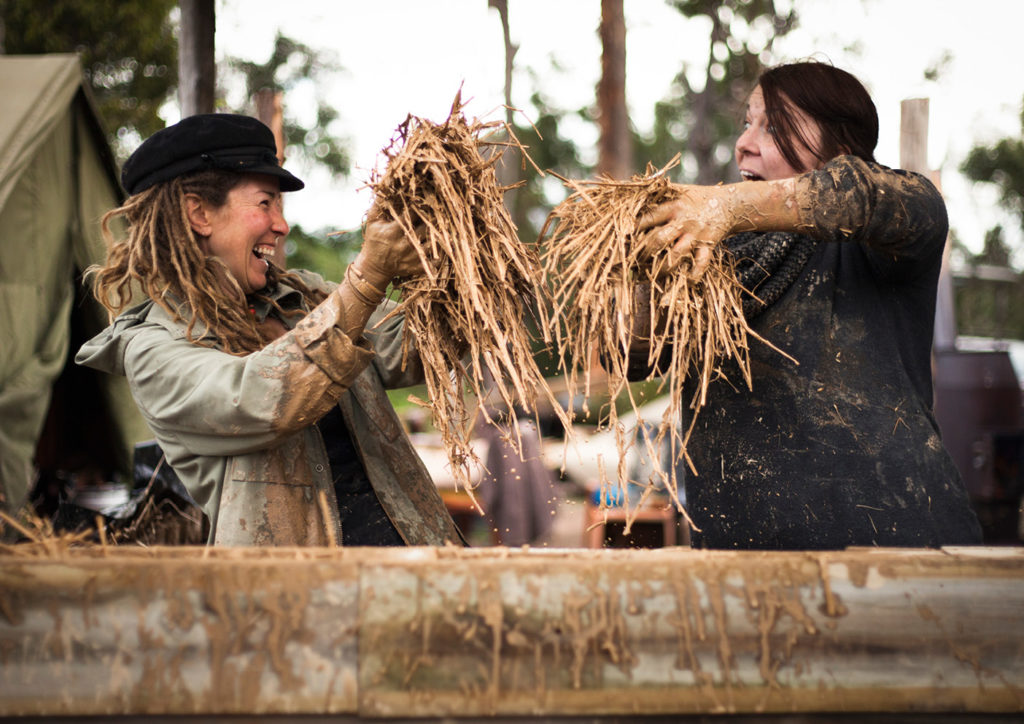 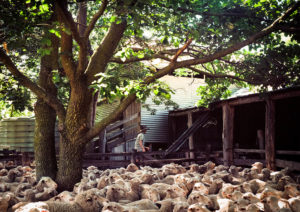 From the seeds of change

The transition of Millpost from a conventional sheep property towards an integrated social-ecological system has been progressing for 40 years. Early tree plantings, like this oak tree in the wool shed yards, are now providing valuable and calming protection for livestock. Grazing regimes encourage native pastures and natural regeneration. As the children and grandchildren grow up here, they are finding their own place in the fabric of the farm landscape and enterprise.

Photo taken by Murray Watson at Millpost – Bungendore, New South Wales, Australia. A book about the property is now available. 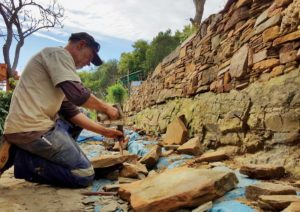 Hamish shapes ordovician sandstone to fit the retaining wall he is building on a bedrock foundation at Melliodora. The stone was formed millions of years ago by sediment built up in layers, which gives it a smooth surface, ideal for it’s new purpose. Hamish hand selected the stone on his way to work, for it’s consistency and strength, saving the big flat pieces for capping the top edge. The wall was built as time allowed over a year and is expected to last for at least 100 more.

Photo by Nick Ritar at Melliodora in Hepburn, Victoria, Australia. 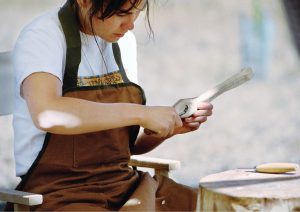 The art of spoon carving

Jasmine is spending a relaxing day on a spoon carving course, learning traditional woodcraft techniques using a few simple hand tools. The skills she has learnt enable her to make a range of useful items, such as spatulas, spoons, ladles, scoops, cups and small bowls from freshly cut timber. Wooden utensils like these have been used for centuries to prepare home cooked meals that bring people together. They are another element that adds to the character of the dinner table.

Photo taken at a Green Woodsmith workshop by Peter Ryle. 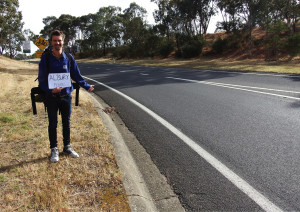 Less is more, more or less

Michael Green often uses his thumb to catch a long distance lift, and carries everything he needs on his back. Waiting near the freeway entrance, with a request for a lift to a nearby city, has proven to be a better technique than waiting on the freeway with a request to the final destination. His plan was to travel 900km before nightfall, but if he didn’t make it the whole way, he was prepared. 10 hours later a text came through “couldn’t have got here faster if I drove myself!”

Photo contributed by Richard Telford. See the blog post about this adventure. 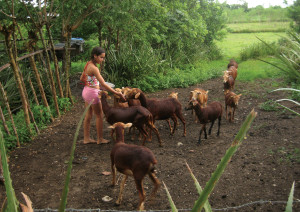 The Pelibüey sheep of Cuba are well suited to the humid tropics through selection and adaptation to grow hair rather than wool. They are raised for food as well as their ability to eat weedy plants that are unappetising to other animals. But there are plants that they don’t eat, such as cactus that can be used with other plants to create barriers. These ‘fenceposts’ are live trees that provide fodder when pruned, and support barbed wire until the cactus behind becomes the fence. 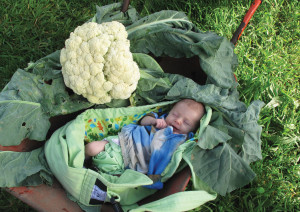 Growing a baby – and a garden

While babies may not come from cabbage patches, you’ll sometimes find them nearby. Four week old Verti, along with this huge cauliflower, are being transported around the garden so that her parents can harvest and weed while she sleeps. The ever changing demands of small children can come as a shock to new parents, so it’s important not to set too high expectations of what can be achieved. Enjoy time caring for the young, and consider any completed tasks a bonus. 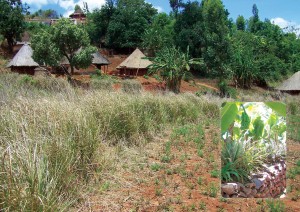 After decades of land mismanagement, the last natural spring of this region had silted over. A communal effort to restore them 20 years ago has culminated in the reinvigoration of the land, providing an example that’s spreading all over Africa. Core to the project has been slowing water run-off using techniques like contour planting, terraces, swales, and bunds, all made by hand. These reduce erosion, recharge the springs and rehydrate the soil, feeding orchards, crops and people.

Project co-ordinated by CELUCT in Zimbabwe, Africa. Photo contributed by John Champagne. The Chikukwa Project – documentary is now available from our store. 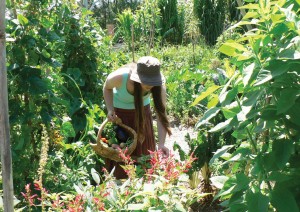 Small home food gardens in our suburbs play such an important role in creating sustainable, resilient networks of diverse food producing spaces. By gently tending to our fruit trees and veggies, giving them time to grow organically at their own pace in rich living soils, we can create food with incredible vibrancy and nutritional value like no other – right at our own back door. 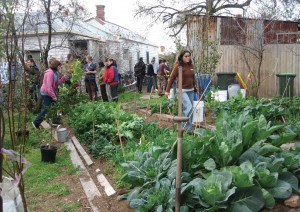 Permablitz – changing the world, one garden at a time

At this winter permablitz we prepared the soil, and planted fruit trees and berries in this neighbour-shared food garden. Permablitzes are sociable and reciprocal working bees for installing edible gardens where people live, with free workshops, and shared food. They give homemakers and the city “a boost along the path of self-reliance and minimal ecological impact.”[Holmgren] They are relatively small events, with broad and lasting influence. 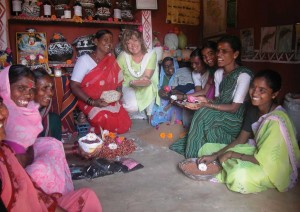 Local Seed Networks conserve local varieties, the basis of genuine local cuisine. Unlike frozen “doomsday” seed banks, they keep traditional knowledge about breeding, growing, and utilising food plant varieties alive within the community. Instead of being frozen in time the varieties themselves adapt to climate change. Small and slow solutions, such as the grassroots seed savers movement, can be more powerful than top down centralised strategies. 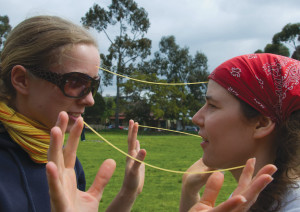 “What are Nora and Cassie doing with their spaghetti? In this game, going slow works much better than going fast. It’s a spaghetti race involving teams racing each other sideways towards a finishing line, while balancing spaghetti between you and your partner’s face. If you drop or break a strand of spaghetti, you have to go back to the start. Please try this at home!” – Christian Parr